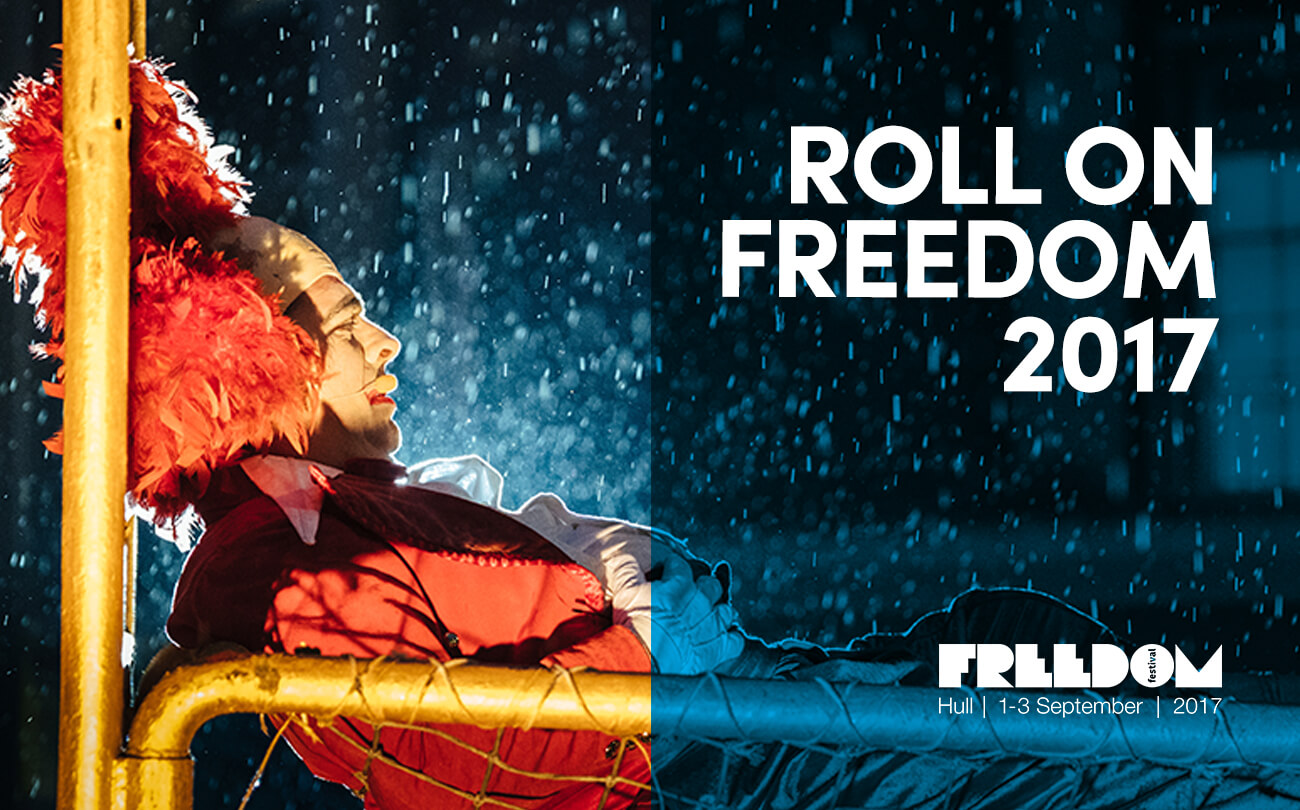 Well, what can I say? What a weekend! It’s our first year working with the Freedom Festival and what a ball we’ve had. The weekend was full of fun, spectacle and just plain bonkers!

It’s hard to pick out highlights as there was so much happening, but we did manage to get out of the Media Hub at C4DI and experience lots of what the festival had to offer. Here are just a few of our most memorable moments:

The drums. Clash of Drums by Les Commandos Percu and Deabru Beltzak on Friday night was just something else. The crowds flocked to Humber Quays to watch the mesmerizing performance full of rhythm, noise and pyrotechnics. And we heard loads of great feedback from people that it was ‘the best show they’ve ever seen’.

The walkabout stuff. Every corner you turned there was another piece of amazing street theatre to wow the crowds. From the mystery suitcase carrying crew to the serious Cops breathalizing unsuspecting folk and those nutters in the bathtubs; it was magical.

The rain. It seems a distant memory now, but at one point on Saturday afternoon we were sat staring out of the window as the rain tipped down and continued to get worse and worse, wondering what would be the next cancellation tweet we’d have to put out. But it was the spirit of the people that struck me most – they didn’t let the weather dampen their spirits; girls danced in plastic ponchos, families gathered under umbrellas and kids jumped in puddles. True Hull spirit.

Wired Aerial. Gasps of horror and amazement oozed from the crowd over at Albion Street car park for the Saturday night spectacular. The story had a poignant point to make and the aerialists depicted it perfectly, chasing and tumbling up and down the screen suspended on high. What a credit to the team to bring the show to Hull.

Spurting Man. I must admit I took a bit of convincing about this guy. After all the talk and innuendo about him, I thought I should take a look for myself and managed to catch his finale performance, which was a surprise addition to the programme, on Stage @TheDock on Sunday evening. What a venue by the way! Just as the Spurting Man came to a climax, the crowds were merrily clapping away to be greeted by inconspicuous volunteers planted in the audience with their own ‘spurting backpacks’ to shower the crowd with water. Absolutely hysterical and a great end to the weekend.

And the response speaks for itself; a Facebook reach of over 150,000 across the three days, 1200 likes and RTs on Twitter and an incredible amount of comments and photos across Instagram and Snapchat.

The biggest thing that will stay with me from the weekend is seeing the faces of people as they experienced something new and loved every minute. Shock, amazement, surprise, wonder and awe. It really was one to remember.